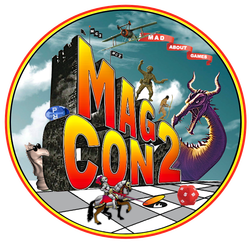 MAG CON got its start in 2009 when Justo Perez first organized it as a fundraiser for an organization that benefits sick children. The organization, whose initials are "M.A.", backed out leaving Justo with a charity event that had no charity to benefit.  Justo found a new charity, Purple Pinkie Project (polio vaccines in developing countries), but kept the old name.  The first MAG CON was held on December 5 and 6, 2009 at a hotel in Kingwood, Texas that had donated the space.  It was a great success.

In 2010, Justo was looking to repeat with MAG CON 2.  He had one big problem - no venue.  The venue that had hosted the first MAG CON was unable to donate the space again.  Justo happened to mention this problem to Dave Donohoo, an attendee of the first MAG CON, during a conversation they had at Little Wars of Houston.  Dave is a teacher at The Learning Center in New Caney ISD and, during an inservice at the New Caney High School Annex, an idea came to him.  He approached his principal, Scott Castleberry, about the idea of a fundraiser for their campus.  Mr. Castleberry liked the idea, and he was able to get the school district to donate the use of the facility.  Needless to say, Justo was very happy, and so a partnership between Justo and Dave very hurriedly brought MAG CON 2 into being.  Jerry Heasley, a teacher at The Learning Center, suggested the idea of "Mad About Games" to give more meaning to the "MAG" in MAG CON. Jerry also designed the logo for MAG CON 2. MAG CON 2 was successfully held on December 4 and 5, 2010 at the New Caney High School Annex in New Caney, Texas. Many volunteers worked to make it a success. Attendance was approximately 120 individuals.  Dave and Justo considered it a good start.

Justo and Dave began to almost immediately talk about realigning the convention to what they believed would be a better time of the year. They agreed that having the convention in December during the heart of the holidays put unnecessary stress on many of the volunteers, and prevented many people from attending.
After careful consideration, they decided on April.  MAG CON 3 was held at the same location as MAG CON 2, on April 2 and 3, 2011.  Attendance was slightly higher, and Dave and Justo looked to build on this success in the following year.

However, Justo soon took a new job in his home town of Miami, Florida, and moved away.  Dave, who was admittedly more of Justo's assistant than partner, was left to plan the event.  One of his first moves was to have a logo designed that could be used year after year.  This was done to help keep overhead down and to help further build the MAG CON brand.  Thanks to the talents of Russell Helms a new logo and a new mascot, Sir Magnus, were born.  Once the logo was secured, then Dave quickly moved to establish a new website and Facebook page.

MAG CON 4 went fairly well.  It was in a different location (Keefer Crossing Middle School) from the previous year (NCISD Annex).  Attendence was down slightly from the previous year.  Dave attributes this to a couple of factors, both related to Justo's move to Miami. First, Dave underestimated the impact of Justo's move to Miami.  Justo knew many members of the Texas gaming community.  He had many contacts that he had made by attending gaming clubs and cons.  When Justo moved a lot of the interpersonal relationships moved with him.  This was something Dave decided he needed to work on in the future.  Second, there was a change over in the web address.  The old website (www.mag-con.net) went defunct, and was replaced by the current one (www.magcon.org).  Many folks made the following equation when they found the old website didn't exist: no website + no Justo = no MAG CON.  Dave learned another valuable lesson - continutity is very important!

Those that attended MAG CON 4 had a great time by all accounts.  The Godzilla Kaiju game was perhaps the rowdiest.  Door prizes were handed out thanks to generous donations by corporate sponsors.  We had a charity auction for the first time.  The MAG CON experience continues to grow and evolve.

MAG CON 5, on April 13 and 14, 2013, was a great success.  It raised four times as much money as the previous year and had record attendance.  It was back in the NCISD Annex.  There was great participation by several sponsors, including game companies and local stores.  Many great GMs directed the fun for attendees in games such as Pathfinder, Dungeon World, Swords & Wizardry, Call of Cthulhu, Ticket to Ride, Khet 2.0, The Lord of the Rings, Malifaux, Warmachine, Flames of War, Godzilla Kaiju Wars, Zombicide, Dungeons & Dragons, X-Wing, Savage Worlds and more.  The auction was a welcome addition that raised 25% of the overall funds for the event.  The expectation is that MAG CON 6 will be even better! The staff of MAG CON is looking forward to seeing everyone at MAG CON 6 on April 12 and 13, 2014.