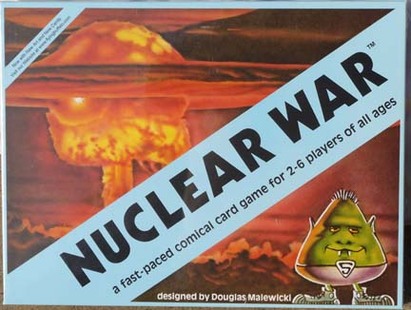 Breakfast With The Bomb!
NUCLEAR WAR CARD GAME: A comical cataclysmic card game for players of all ages. A humorous confrontation between touchy world powers as each player attempts to sway his opponents' populations with diplomacy, propaganda, and finally nuclear weaponry. Little old ladies defect in electric cars and the dread SUPERGERM spreads devastation!  I'll add in expansions depending on the number of players.  Multiple rounds will be played.

2015 will be the FIFTIETH anniversary of the Nuclear War card game. Come and celebrate by defending your country against all others. The more players we get, the more sets I will combine.