MAG CON 2020
Go here to see the schedule of events and reserve your spot in an event. 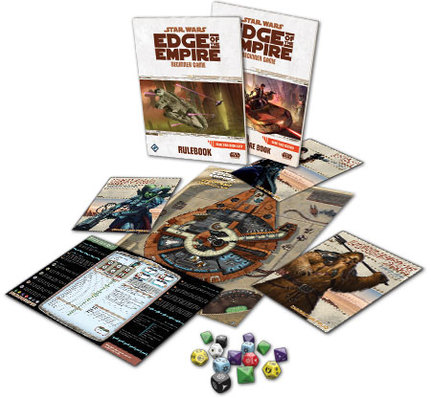 The Star Wars: Edge of the Empire Beginner Game features a complete, learn-as-you-go adventure. Pre-generated character folios keep rules right at the your fingertips, while custom dice and an exciting narrative gameplay system make every roll into a story. Detailed rules provide for hours of entertainment in a galaxy far, far away!

Star Wars Edge of the Empire: Beginner Box Adventure Part 1
It is a period of unrest and opportunity in the galaxy. The Galactic Empire stuggles to maintain control in the midst of civil war. Meanwhile, scoundrels and smugglers, explorers and expatriates, and fringers of all types scramble for a living on the edges of galactic civilization. It is a hard life, but these renegades have more freedom and opportunity than any citizen of the Core Worlds.

On the desert world of TATOOINE, a few such renegades have run afoul of a local crime boss, TEEMO THE HUTT. Trapped in the tiny spaceport of Mos Shuuta, the renegades have no choice but to steal a starship and flee Teemo's forces. Fortunately, a suitable starship has recently docked at the landing bay: a freighter called the KRAYT FANT, captained by a trandoshan slaver named Trex. As they flee through the suns-baked streets, the renegades duck into the local cantina to hide from their pursuers...

Star Wars Edge of the Empire: Beginner Box Adventure Part 2 [8-12]
After the events of Escape From Mos Shuuta, our heroes have escaped from Teemo’s palace on board the Krayt Fang, but only for the moment. While their new ship can take them to new worlds on which they face new enemies and meet new allies, Teemo’s influence reaches further still. It is only a matter of time before Teemo pulls the heroes back in and calls all debts due. Will they ever truly be able to crawl out from under his dark shadow?

This Scenario directly follows the events of Part 1: Escape from Mos Shuuta. It is recommend that players sign up for both slots, it is not necessary. Walk-ups welcome!

Star Wars: Edge of the Empire: Under a Black Sun [8-12] (Decided to go with a different Scenario)
It is a dark time for the galaxy. The city of Coruscant, once the glittering pearl of the Republic, now languishes under the shadow of the Galactic Empire. A bustling black market flourishes in the underworld, controlled by the notorious crime syndicate BLACK SUN.

Hired to infiltrate a Black Sun outpost and retrieve the vital data on a bounty hunter who betrayed the PYKE crime family, a small group of enterprising individuals works rapidly to access the heavily encrypted Black Sun network as things take a turn for the worse...